Since 2009, Studio Laurent Photography & Design has captured every Halloween party at Half Moon Sports Grill in north Phoenix, AZ. This year was no different and as usual, we had such an awesome crowd with tons of very cool and creative costumes… Definitely a very fun evening!

If you missed it, here are a few pics…

You can view the full gallery on my website at:
www.StudioLaurent.com/2016halfmoonhalloween

On October 17, 2015, Studio Laurent Photography & Design was thrilled and honored to attend and capture the photography at the 6th annual “Knuckle Ball… A Pitch For Life” a black-tie evening and amazing gala event organized by The Joe Niekro Foundation at the JW Marriott in Phoenix.

END_OF_DOCUMENT_TOKEN_TO_BE_REPLACED

Studio Laurent Photography & Design is very much looking forward to photographing this event on Saturday night!!!

Chairman, Natalie Niekro, of the 6th Annual Knuckle Ball…A Pitch for Life, on October 17th, at JW Marriott Desert Ridge, is pleased to announce some of this year’s participating athletes who will be honoring her father and former MLB pitcher, Joe Niekro while raising funds for brain aneurysm, AVM and hemorrhagic stroke research.  Attending and mingling with the guests, to name a few, will be:

Since Joe Niekro’s tragic and sudden death in 2006…

As some of you may know, my daughter Chloe was born in January 2014 with a Vein Of Galen Malformation (VOGM), which is an extremely rare type of AVM. Over the past 18 months she has gone through 6 brain embolizations. Her first two taking place at one and two-day old and the last one being in December 2014. She is doing much better now but her VOGM is still there. She has received tons of wonderful support from The Joe Niekro Foundation and its members over the past several months and I have offered my photography services to this wonderful organization and their Annual Knuckle Ball event on October 17th in Phoenix. See event details below… 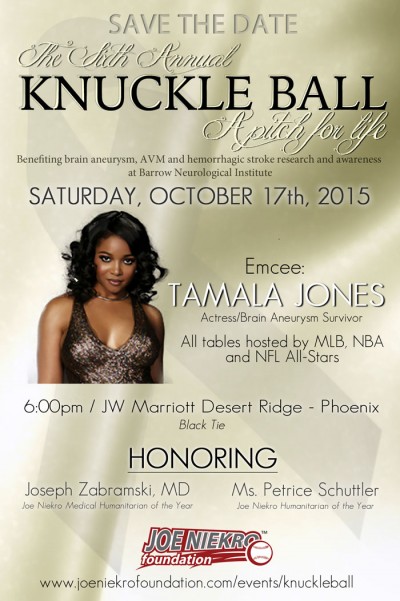 On October 17th, 2015, athletes from all over the country will come together, in association with The Joe Niekro Foundation and The Society of Neuro-Interventional Surgery Foundation, to support brain aneurysm, AVM and hemorrhagic stroke research and awareness, for the 6thAnnual Knuckle Ball…A Pitch for Life at the JW Marriott Resort in Phoenix, AZ.

The black-tie evening, hosted by actress and brain aneurysm survivor, Tamala Jones, will feature a festive reception, silent auction, formal dinner, event program and LIVE auction (plus a few surprises in between).  The gala is the foundation’s largest event of the year and pays tribute to those that have lost their lives to these fatal conditions, while honoring the survivors who are fighting everyday to recover.

We are proud to announce that Petrice “TC” Schuttler will be honored as the Joe Niekro Humanitarian of the Year for her outstanding commitment and contributions to the Phoenix community.  Petrice…

On Sunday April 15, 2012, between 9 AM and 1 PM took place the FIRST ANNUAL BOOBALOOZA at Gold Key Racquet Club in Phoenix, Arizona.

Studio Laurent Photography & Design was honored to cover this inaugural event as well as donate a photography session for the silent auction that took place as part of the event. You might wonder what a Boobalooza is? In short, it is a fundraiser event to benefit the John C. Lincoln Breast Health and Research Center.

The long version is that everyone is affected by breast cancer in one way or another. It may be a friend, neighbor, relative or even yourself that has been afflicted by this dreaded disease. It is likely you will know someone who will encounter breast cancer, as one in eight women in the United States will develop it at some time in their life.

You’ve heard stories, some tragic and some with heart warming endings. I’d like to tell you Abby Irish’s story. She is a friend and fellow member of Gold Key Racquet Club in Phoenix, AZ.

Abby was first diagnosed with breast cancer in September 2007. She had been fortunate enough to be connected with the John C. Lincoln Breast Health and Research Center in Phoenix. After many anxious days that led into weeks and months, Abby came through the difficult surgery and rehabilitation with flying colors (She loves purple so let’s say purple and pink!).Abby had a lumpectomy and ‘thensome.’ The hospitals give out mastectomy baskets and include a pillow of sorts. Not a very comfortable one but something to help ease the pain while recovering. During this time, Abby’s mom, Adrienne Kurland, was in Rancho

Mirage dealing with Abby’s dad who just had a quadruple by-pass and couldn’t leave the hospital. Abby’s mom saw the ‘heart’ pillows that were given to the heart patients and thought why not a ‘booby’ pillow for breast cancer patients! There it was, in the thought process and then a couple of days later in reality. Abby received the first ‘booby pillow’ of its kind. The pillow was hand-made by Adrienne in very pretty pink fabric.

Wanting to give back, Abby decided to donate booby pillows to the John C. Lincoln Breast Health and Research Center. They became very popular with the patients. To date, around two hundred pillows have been donated by Abby.

At first, her mother, who lives in California, was the main seamstress of the pillows. Abby enlisted another seamstress and it soon became a big and costly project. So once again, Abby’s creative juices started flowing. She wanted to combine her love of tennis and the love of her passion to help others through her pillows. She came up with the idea of a fundraising event, called BOOBALOOZA and engaged Gold Key Racquet Club as the host venue. She had been hitting the streets, not literally or at least not on purpose, for donations and support and was hoping to raise at least $500. John C. Lincoln also pledged to match the $500, which would be enough to supply a little over sixty-six pillows for the Center. Each pillow takes almost fifteen dollars to make. The cost of living goes up as well as boobs! That means sixty-six women would receive some comfort as they recover from the breast cancer surgery. However, there are many more going through the difficult aftermath without the comforts of a booby pillow.So Sunday, April 15, 2012 was the date of the BOOBALOOZA. The weather was perfect and it was an event to remember with everyone wearing pink for fun tennis, fabulous food, hilarious booby prizes and a special silent auction. In the end, THIS EVENT RAISED $1,837.00 for the John C. Lincoln Breast Health and Research Center’s booby pillows!!!… There will be a lot of smiles and comfort for the ladies in need 🙂

In addition to the images included in this post, you can also view the full image gallery by going to my Client Galleries on my website or by clicking here!

Studio Laurent Photography & Design is the official Photographer for the following organizations. Click a logo to access the corresponding image gallery:

These are my "best nine" of 2017 on IG... Thank you so much for all your likes, comments and words of support!
Scott Foster had such a wonderful performance last night before the lantern launch at the 2017 Lantern Festival. Beautiful guitar skills and what a voice! Make sure you go check him out on his feed at @scottfosterrock 🎤✨🎶🎸🎵
Throw back to this day a few years ago when I was in the Reunion Island celebrating my 5th birthday. I can't believe so many years have passed!... I barely feel a year older!!! 😂🎂🎉🥂
Jumping International de la Hague this weekend in Beaumont Hague, Normandy (France).
➡️ SWIPE ➡️ Last Saturday night was the 7th annual Grand Bal Masqué at the Versailles palace. The ball took place following the Grandes Eaux Musicales & Fireworks from 11:30 pm until sunrise in the Orangerie area of the palace. Talk about major partying!!!... The only two requirements to attend this party were to be dressed in a baroque costume and to wear a mask. This allowed for some amazing elegance, fantasy and creativity from the attendees. Here are a few of them as they arrived at the palace... 🎭👑🎉 More images will soon be viewable on my Facebook page and website via link in my profile if interested.
Feeling so good to be home!... Only wish it wasn't as warm as Phoenix! We reached 100°F here today!!! 🔥😱
How about another train image? I took this image a couple of years ago but I spent 3 years living in Flagstaff while attending Northern Arizona University in the early 90s and I can tell you that trains were a huge part of my everyday life. I could hear them pretty much from anywhere in town and I often spent time at the railroad crossings waiting to get to the other side of the tracks. Not surprising that there are 80-100 freight trains going through Flagstaff on a daily basis and that it's actually the busiest freight train line in the world!!
After the model railroads from yesterday in Scottssale, here's a real train ride that I took a few years back through some of the canyons of the Verde Valley in Arizona. I highly recommend this experience!